Very little is known about Irenus Atkins, but what we do know is that he had vision. Plenty of vision, in fact. He had so much vision that after declaring personal bankruptcy and going out of business multiple times, he kept jumping right back in! He was involved in at least 9 and probably 11 companies in his lifetime (b. 1793, d. 1880) all of which went bankrupt. Any “Atkins” clocks still circulating today are typically from the 1850s and onward as part of the Atkins Manufacturing Company, the Atkins Whiting Company, the Atkins Clock Company, and the Barnes Brothers Clock Company, the last of which he was a shareholder in before his death.

The clock I’ve been researching recently belongs to my Great-Aunt Alice, or as we call her, Allie. She inherited it from her grandmother, which perhaps qualifies it to be called a “Grandmother Clock” by some standards. (Since she’s the owner I think she gets to decide.) Allie’s clock was made by the Atkins Clock Company which I know for certain because of certain distinct features on the dial and the style of woodwork, but most importantly because of the research and historical work done by Phil Gregory and Robert King, both Atkins clock collectors.

Some people collect stamps, some collect art, some collect dead bugs (ew), and some collect rare clocks and watches, and that last group have a society called the National Association of Watch and Clock Collectors (NAWCC). The NAWCC has been mentioned in previous posts and will be mentioned many times in the future because they are an invaluable resource to students of horology such as myself. They have a lively forum in which any member can respond to any thread with their thoughts on the subject, they hold a yearly symposium (happening soon!) and much more.

“I won’t say it’s going to be successful, but we’ll sure learn a lot,” is how Phil Gregory, specialist on Irenus Atkins, described his acquisition of a gold foil beating machine, and that seems to be the general philosophy of the NAWCC members who I’ve interacted with. I actually like that life philosophy quite a lot, and if I hadn’t already appropriated a personal tagline (To Infinity and Beyond!) I would consider that a good option.

Allie’s clock contains the last type of movement that the Atkins Clock Company produced, which began circulation in 1863. It was that same year that this clock, very similar to the London model, began to be produced. How do I know it was the last type of movement produced? 1) Because I just watched an online video of a presentation on Atkins clocks and 2) Because of where the winding holes are, where the keys fit to wind the springs on the clock. Note how on this older Atkins clock, for sale on the Skinner Auctioning website, the windings are located centrally.

On Allie’s clock the windings are located at IV and IIX. Before even having to resort to such detective work, the solution was presented to me by a picture taken by Allie of the inside of the clock. 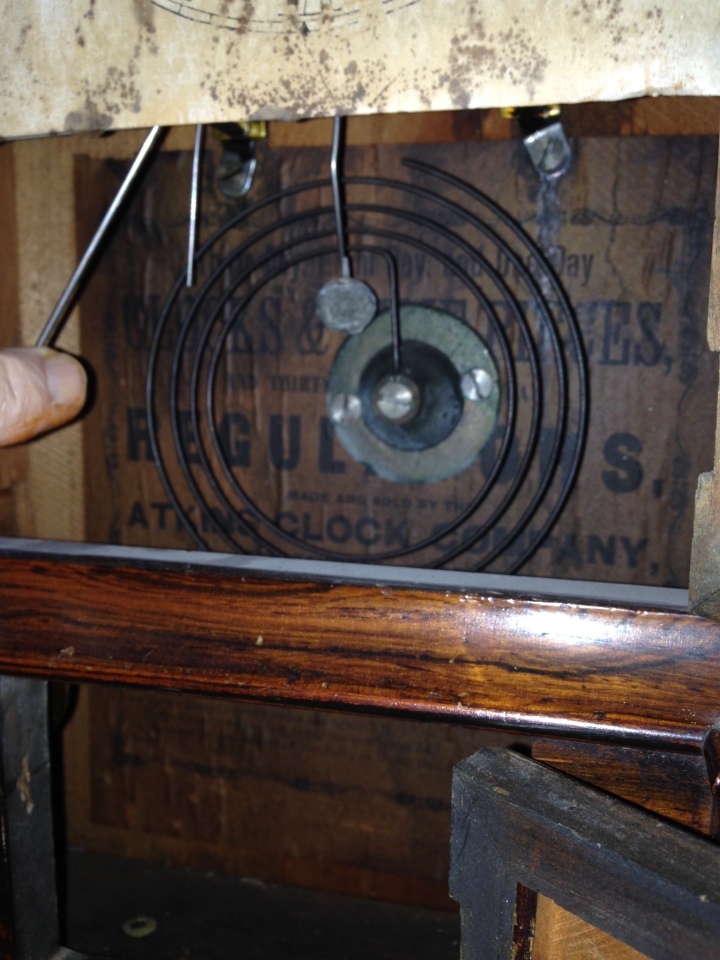 Central in the picture, below the word REGULATORS, is the name Atkins Clock Company.

Well that was easy! Okay, okay, not so fast. I’m sure there are still tons of cool things we can learn about this clock.

Like, for example, Atkins was notorious for not putting labels on their clocks, so Allie really lucked out by getting an original clock with all the original parts and an original label. And yes, I’m sure all the parts are original, perhaps with the exception of anything I can’t see in the photos. However we have every indication that this clock has been kept in good condition based on the quality of the wood veneer on the case and the high quality of the paint on the dial.

Perhaps you’re looking at the image above and wondering what I’m talking about. High quality paint on the dial? You mean the paint that’s chipping off and cracking in places?

Actually, this clock in particular is known for having dials with an improper base coat of paint, causing the paint to chip in most clocks. If you look above to the picture of Allie’s clock, the dial is showing at the very top of the photo. The paint is chipping and showing some age but is still in generally good condition. It’s possible that at some point this clock was brought to a high-quality clock restorer and this dial was repainted, but it’s very unlikely that it would still look so accurate and still have the chipping that it does have. What this means is that this dial is an original, that it hasn’t been repainted, and that it has been kept in good condition (i.e. no flooding, no excess humidity, no extreme temperatures, etc.). Allie’s grandmother is my great-great-grandmother, so I suppose this is another instance when I should be thanking my great-great-grandparents!

What else do we know about this clock? Well, with this model Atkins was finally starting to learn the lesson that he didn’t learn with his first 9 businesses – that “better” isn’t always better. Atkins was known for making accurate and extravagant clocks for a predictably high price. That gold detail you see on the glass of the clock?

That’s not gold leaf, that’s gold foil. Gold leaf is made to be as thin as gold can get, while gold foil can be any thickness above that. Without Irenus Atkins here to tell us himself, we don’t know how much gold is present on this clock, but we can guess that it’s high-quality, thick gold foil. The reason we know that is because owners of Atkins clocks have reported that the clock will experience virtually every other type of failure, break, crack, etc, but that the gold foil is never harmed. Hence Phil Gregory’s happiness upon receiving a gold foil beating machine – he is determined to figure out how on earth Atkins hammered thick gold foil onto glass and got it to stay without ever peeling for 150 years.

A few other interesting tidbits about Atkins and his companies – for a while during the 1850s the Atkins Clock Co needed to make money in a hurry, so they sold off all of their stock in whatever mismatch of case vs clock they could come up with. They would buy movements from other companies to fit inside any extra case they had, and they would give their own movements away in exchange for services or trade. It wasn’t until around the early 1860s when the London model came out, shown below, that things had stabilized and they were making all their own movements and cases.

Allie’s clock is a type of the London model, but is missing the characteristic gold columns. Sometimes these columns were gold plated and sometimes covered with gold leaf. Some of them may just have been painted gold. The London model was an 8 day Rosewood shelf clock, just like Allie’s is. Rosewood was not and never has been an inexpensive wood to work with. Generally it just means any richly hued wood with dark veins, but it can more specifically refer to types of woods from South America. Atkins probably used the word “Rosewood” to distinguish the high-quality beautiful woods he used in his clocks, as opposed to any cheap wood covered in veneer that any other manufacturer would have used to keep down costs.

Atkins clocks were known for being expensive, and unfortunately only one brochure exists from the Atkins Clock Co and it is not owned by a museum and has not been made public. For that reason I can’t tell Allie an original cost for her clock. I do know that for the time period it was considered wealthy and extravagant, though not as much so as some other Atkins clocks. See below for a completely gilded Atkins & Whiting clock shown in the Phil Gregory and Robert King Atkins Walking Tour video from the NAWCC video archive. 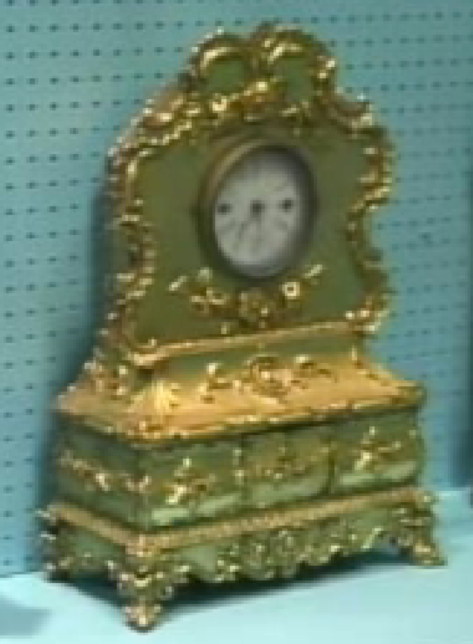 His most sellable clocks were his Victor Round Top clocks, for which Atkins patented the wood design on the front of the case, which was the only patent he held. One is shown below.

In summary, Allie’s clock was made by an interesting man in his later years of clockmaking. It’s impossible to know how many were made and how many still exist, but fewer were sold by Atkins than by other clockmakers because the prices of his clocks tended to be high.Her type of clock began to be sold in 1863 and was possible sold through the mid to late 1870s, but definitely not after the Atkins Clock Company was bought out in 1879. It is made from high-quality Rosewood and should run 8 days without needing to be rewound (though I don’t know the condition of her movement in particular). It has all the original parts and looks to be in extremely good condition.

Thanks for reading! Coming soon: some fun with a Hermle movement and perhaps an E. Ingraham (so excited!!). Ongoing: Fixing my Ansonia Sculpture Not-a-Wall-Clock and playing with my German porcelain clock.