The night is young and so is my creation. Dare I, though?

I have come into the ownership of (most of) a 1980 Hermle 341-020 clock movement and it’s so shiny and pretty and wonderful and there’s just one tiny problem: it’s missing a few parts. Can you tell which? 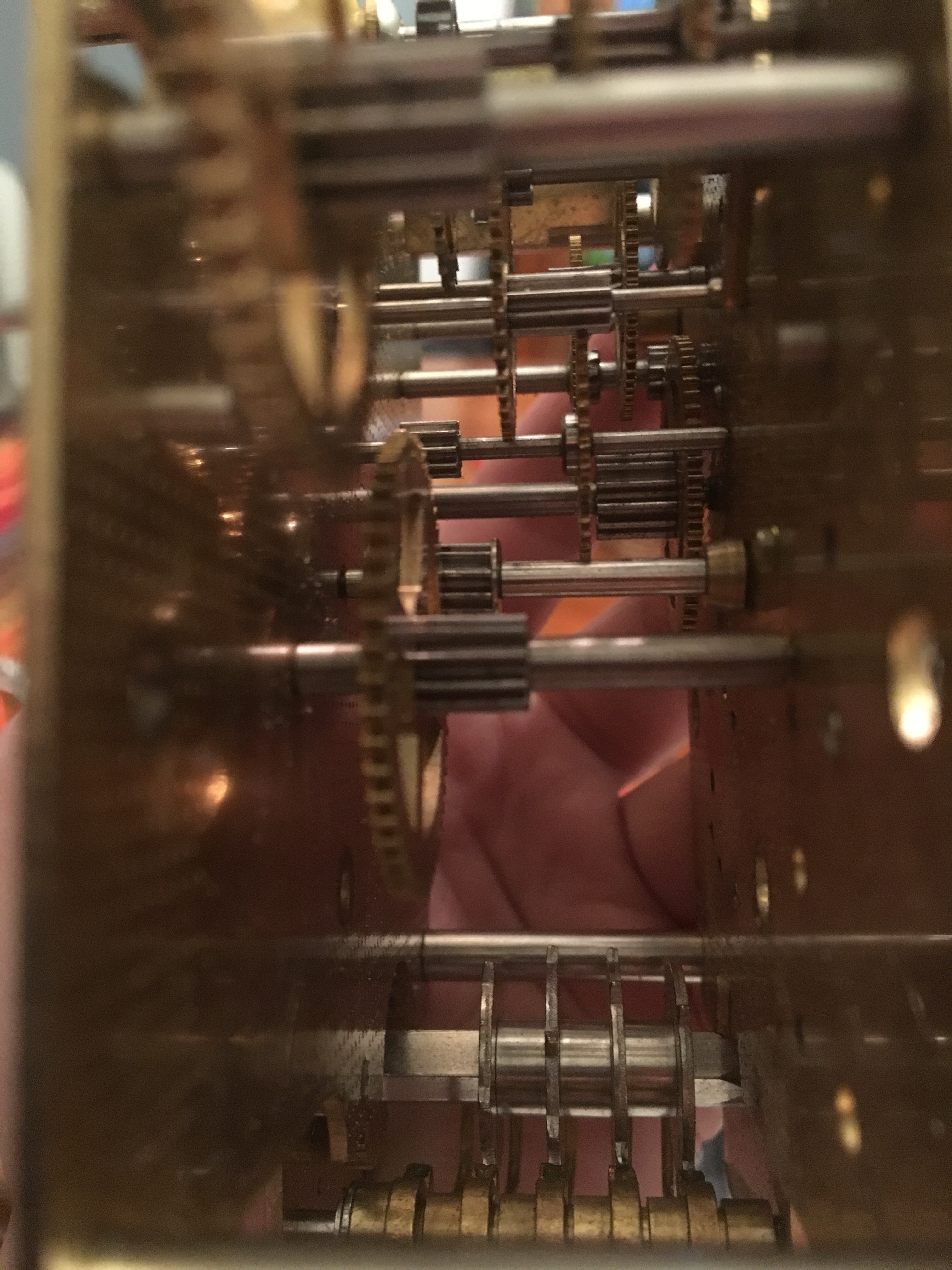 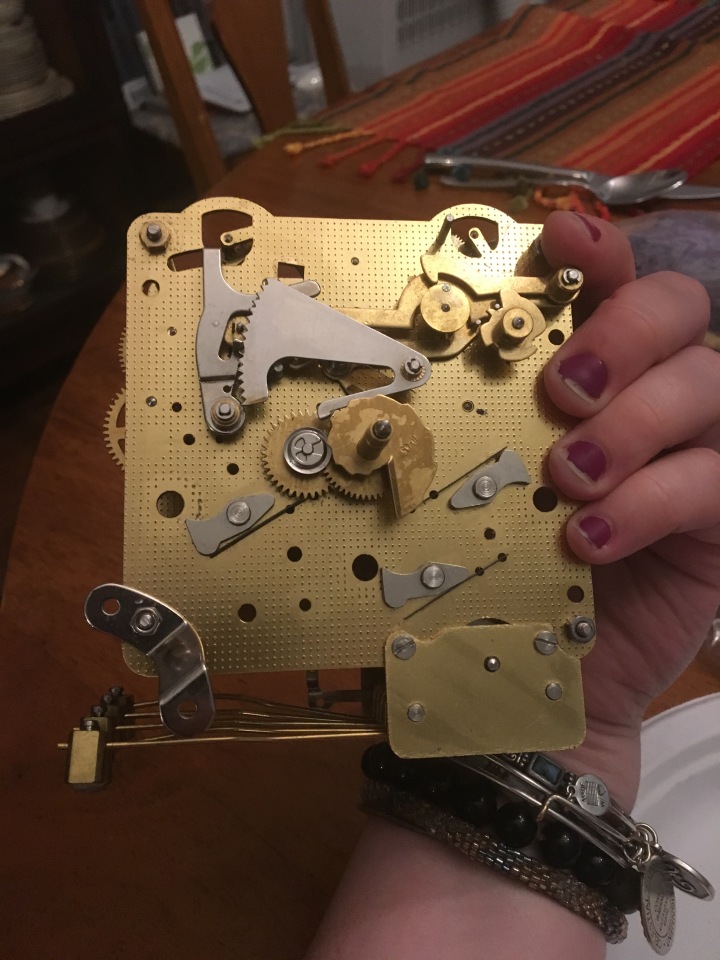 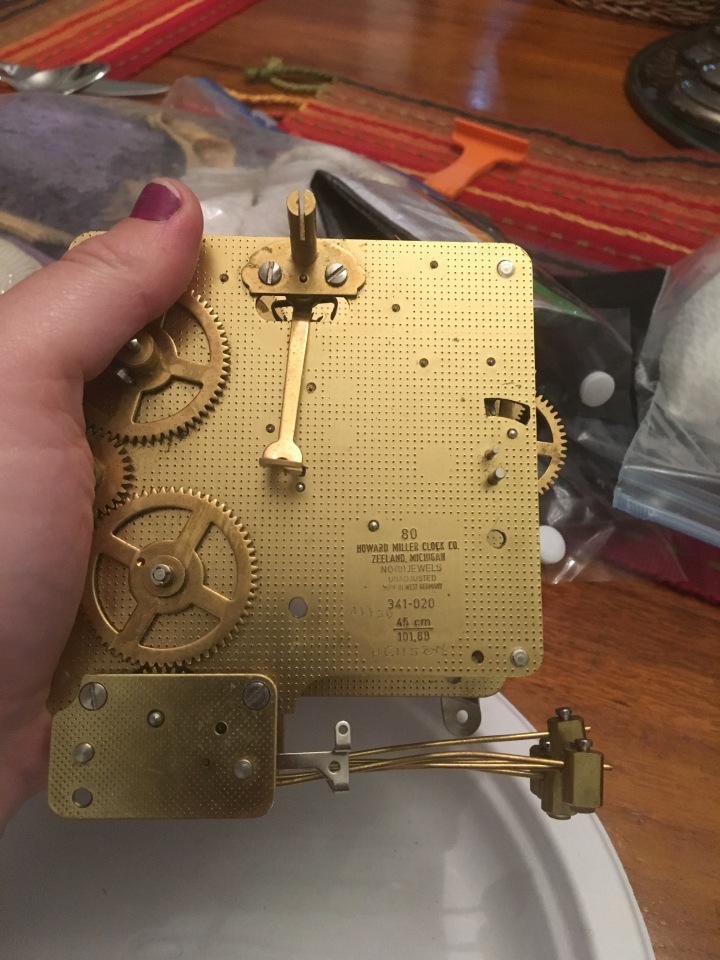 Well, springs would probably help. A pendulum, too. Probably also some chimes for those five mallets at the bottom. I’d say this is 70% of a clock movement. More like 85% if you don’t care about the chimes.

So where did this come from (besides eBay)? 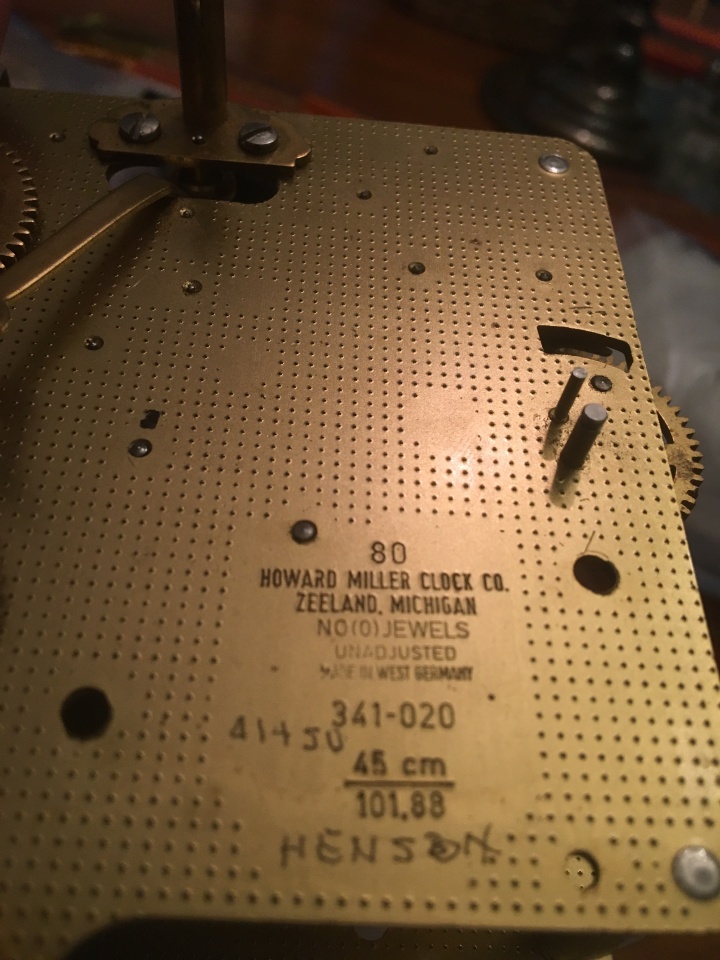 Well apparently it was made in 1980 (that’s what the 80 means at the top of the inscription) and used to be inside a Howard Miller clock. Howard Miller is one of the few surviving clockmakers that makes very nice modern clock cases and uses antique-style mechanisms. Unless you want a Quartz clock (most people do) you’re limited to luxury brands or clocks similar to Quartz.

This movement is a Hermle, which is a name you may be familiar with if you’ve ever heard anything about modern clocks. Hermle is everything you want in a clock movement manufacturer – they have a a clear and easy-to-follow history, an index of clock movements, they survived World War II despite being based in Germany, and replacement parts can easily be bought online. This movement sells for $249 new. This one is 36 years old at the time of writing this, which isn’t really that old for a clock. It’s already been serviced once, as you can see from the inscribed jeweler’s note on the back of the clock.

So what to do with it? Replacement parts would cost me a whopping $125 but then I would have a lovely working clock mechanism. But ouch, $125. And I don’t have any fancy Howard Miller clock cases lying around, either. This is definitely a mechanism I could sell for profit, if it were working and I could find a nice case to put it in.

Well, I suppose I do have a few odds and ends lying around… 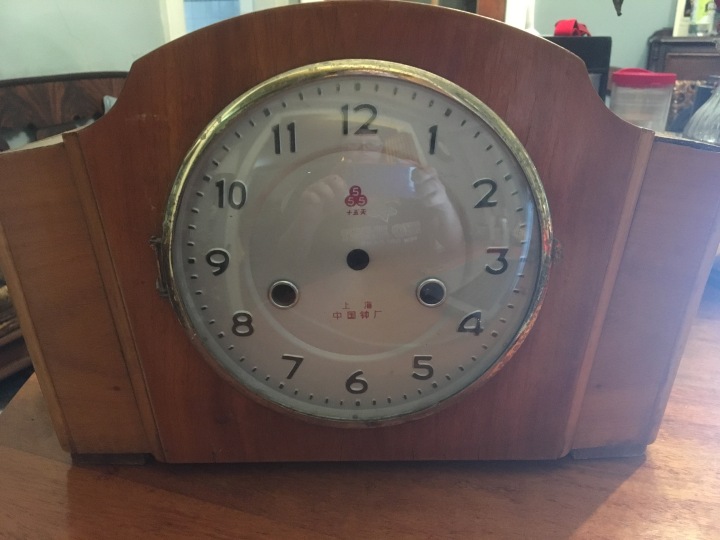 I worked on it about two months ago and posted my work a few weeks ago. I can’t get the escapement to work quite right, but I haven’t forgotten about it. It would be a shame to give up on that escapement, I think, so I think I’ll leave that clock alone for now.

A real possibility is this 1928-1930s Plymouth Clock Company mantel clock that used to take a specific A/C voltage… before the electric cord was cut. 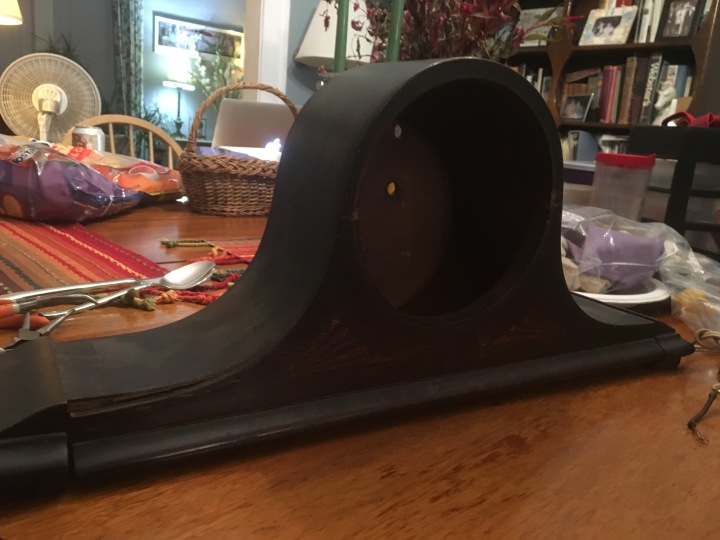 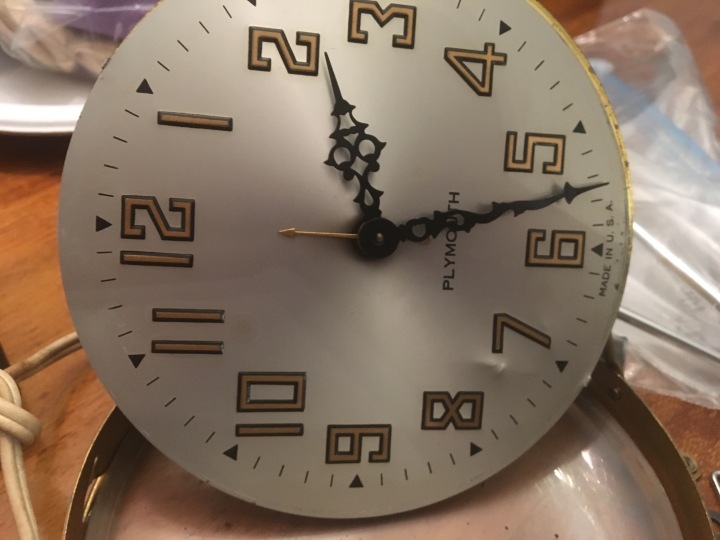 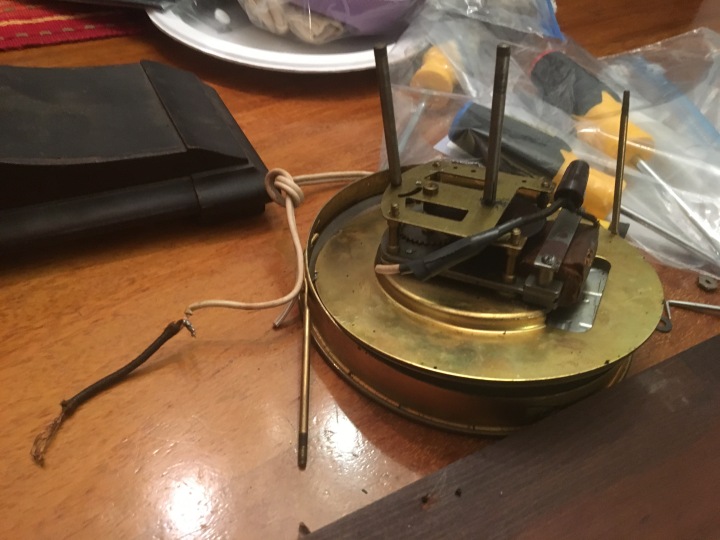 I don’t have any details about the motor or the materials used in the clock so I’m more than happy to trash them, or more accurately, dispose of them as hazardous waste. A little research tells me that these Plymouth clocks were a way for a struggling Seth Thomas Clock Co to dump some cheaper clocks and cases on the market without breaking any contracts with sellers. That implies that this case may not be as worthy as some others, but I’ll wait to decide that for myself. 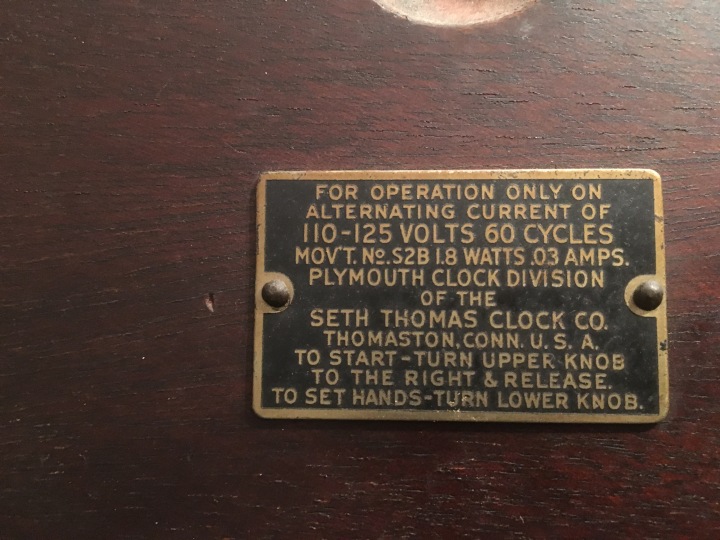 You can see some wood splitting in the image below. What should have been one piece on the inner underside of the clock was two pieces glued together, causing the front left corner of the clock case to start to come apart. Overall, not a hard fix. 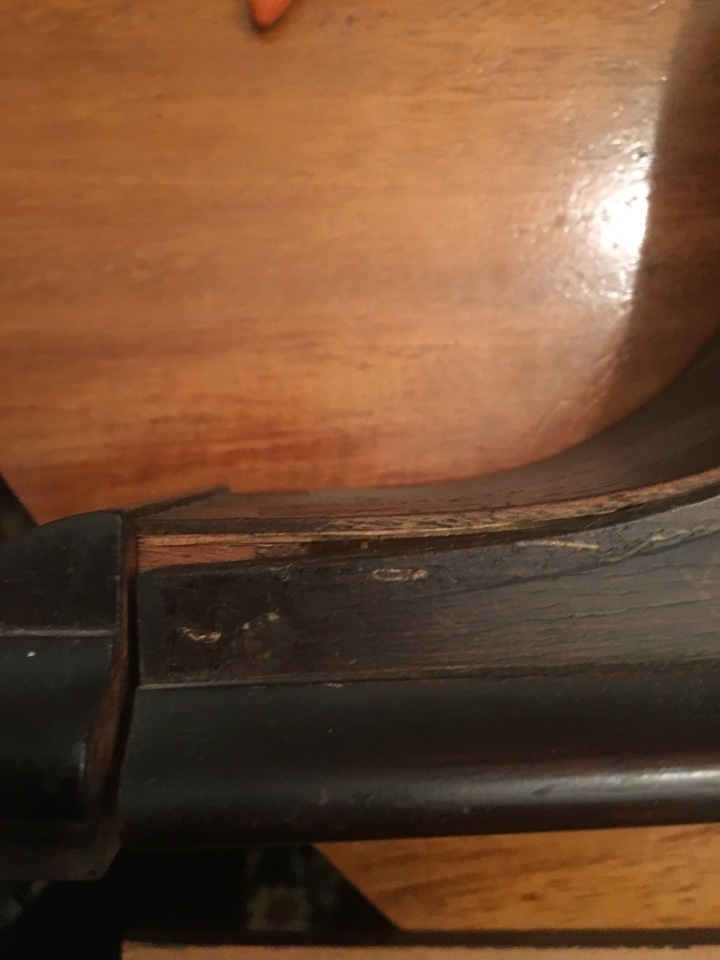 Overall the case is actually in very good condition for a clock that is probably 85 years old. I’ll keep this one in mind, since it doesn’t come with a usable clock movement and since it is definitely large enough to accommodate the Hermle movement and its chimes.

Another potential option is my New Haven Clock Co. clock that I haven’t opened yet. Haha! Yeah, right. That clock is definitely being saved for a special day, and if it needs a new movement then it’s getting an original. 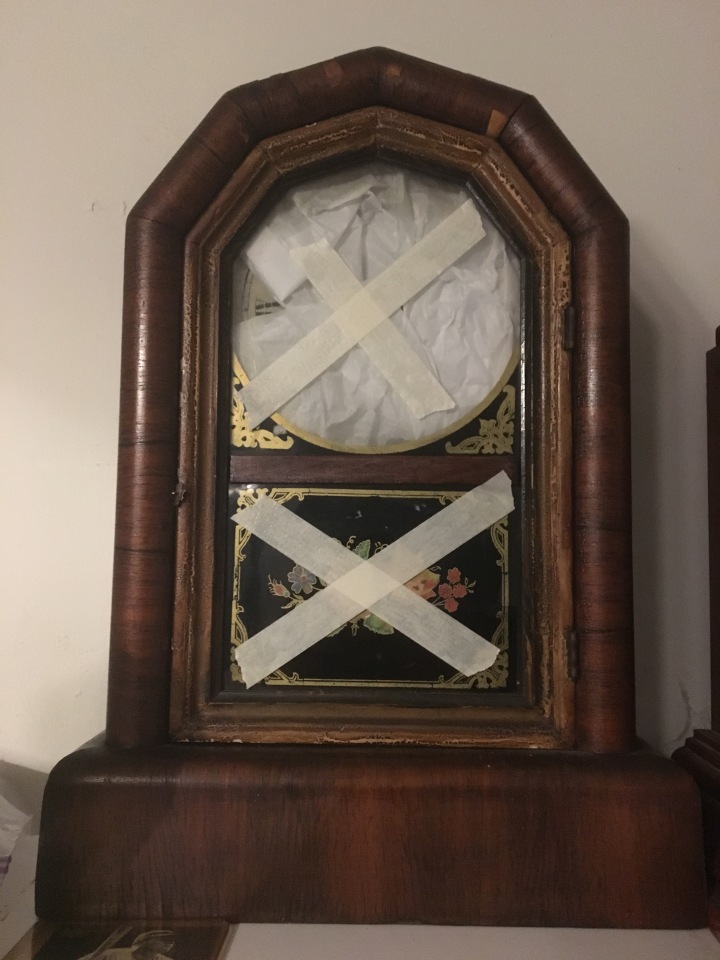 The same goes for the Ansonia and Seth Thomas shown below, even though the Seth Thomas is in a bad state externally. 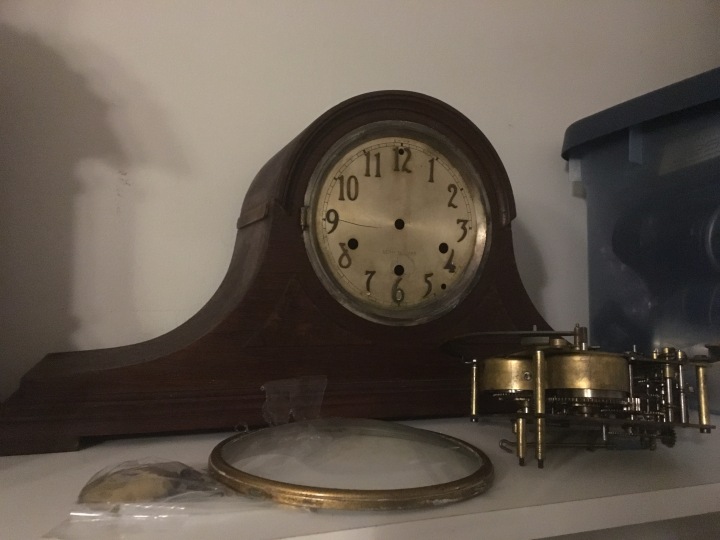 The Seth Thomas comes with the original movement, in the foreground, so I’d rather not separate the two if it’s not necessary. The Ansonia supposedly does as well, though I haven’t opened it yet.

Really, it’s a wonder I ever do anything except play with clocks considering all the goodies I have here!

That brings us to our final option, a more modern Seth Thomas sharp gothic clock that is electric and seems to be in good condition, though the eBay seller says it does not run. 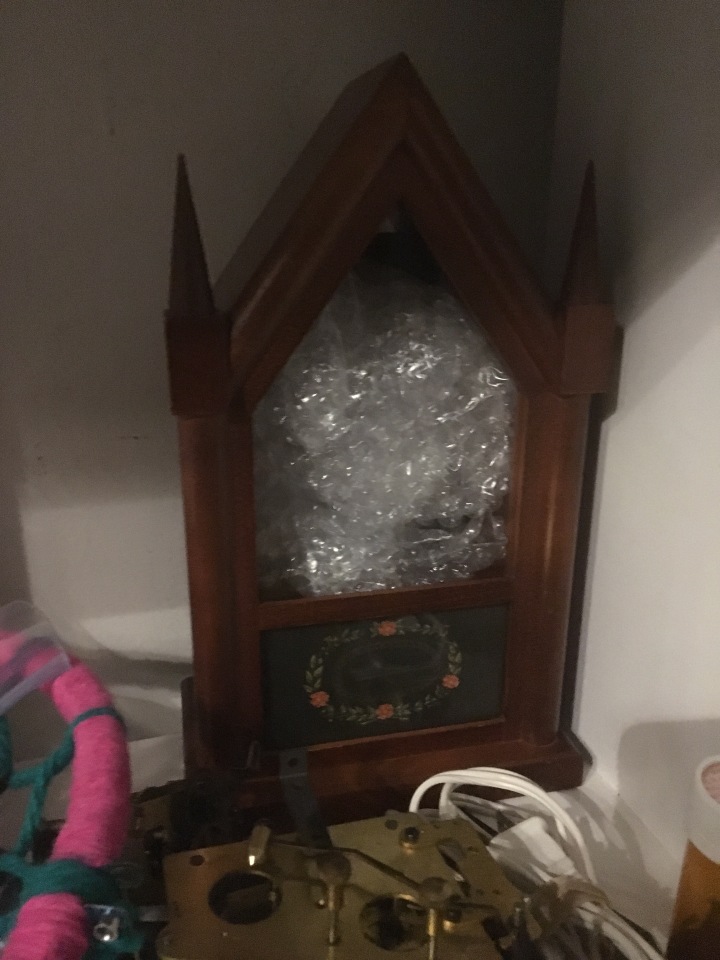 I didn’t realize it was electric when I bought it.It’s just such a pretty case! Joe Walsh may be an analog man in a digital world, but I’m more of a gears and levers kind of person. I would feel no remorse tossing the electrical components.

The Hermle movement fits inside it, but barely. I also think the acoustics would be better inside the larger, entirely-wooden Plymouth case. If I purchase the required parts to complete this movement then I would need to sell it, which also plays a factor.

What I’m going to do is buy the parts (I can feel the lightening of my wallet now) and see how the chimes fit and sound inside each clock. I have a feeling they’ll sound best, and get the best price, inside the Plymouth. It may “only” date back to the late 1920s or 1930s, but I’m mentally comparing it to the early Seth Thomas clocks of the late 19th century and early 20th century. It’s still an antique clock. I haven’t researched the electric sharp gothic Seth Thomas at all and I shouldn’t be so hasty to trash what could be interesting parts. In fact, maybe I’ll find a vintage Seth Thomas movement one day to put inside this sleek, modern, sharp gothic Seth Thomas clock case.

If you have any opinions about my next course of action, please comment below or send me a message! I am also, as always, taking suggestions for Date Night clocks. Soon you’ll be seeing a post about my Great-Aunt Allie’s beautiful Rosewood shelf clock, so stay tuned and thanks for reading!

One thought on “Young Frankenclock”