Have you taken the time to thank your great-great-grandparents today? Perhaps you should.

My wonderful Aunt Julie volunteered her clock to this week’s date night, inherited from her mother (my grandmother), and to my grandmother presumably from her grandparents in Winfield, KS. Julie lives about 1000 miles from me so there was absolutely no way to see the clock in person. She answered my questions via email even when I asked her to do strange things like feel the top of her clock for indents.

Why would I ask such a thing?

Now before we go further, there’s one caveat: this clock is missing the piece that makes it so unique.

Ansonia simply did not do animated clocks. Yes they had clocks that swung and balanced and had pendulums, but they did not make any clocks with external animated pieces – except for one. This one.

Above is a picture of the complete clock, from an auctioning website. It sold below bidding price for $1250. 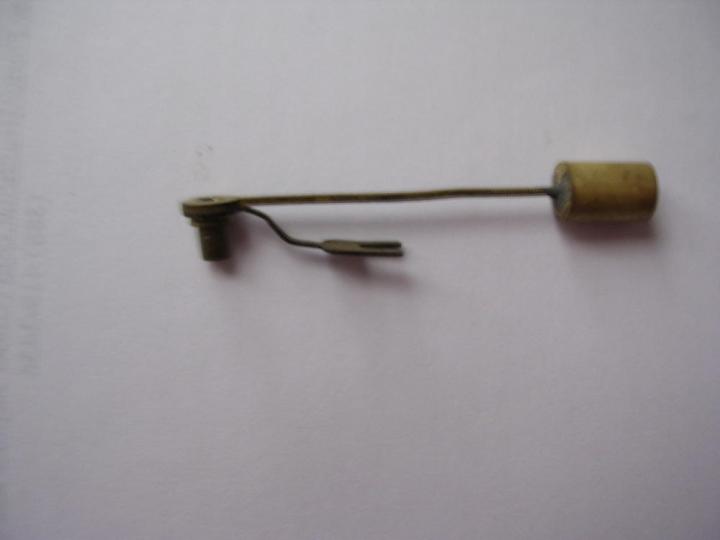 Below is a picture of the brass movement (the inner workings) of the clock owned by Julie. Note that you can’t see how the escapement would attach to the moving ship’s wheel above. But it does (or it would) through the top. At the bottom of the picture, toward the left, you see a coil. That’s the chime, or gong. If you look just to the right of it you can see the mallet that hits the gong on the half hour and hour. That’s why there are two springs, one for the time and one for the gong. 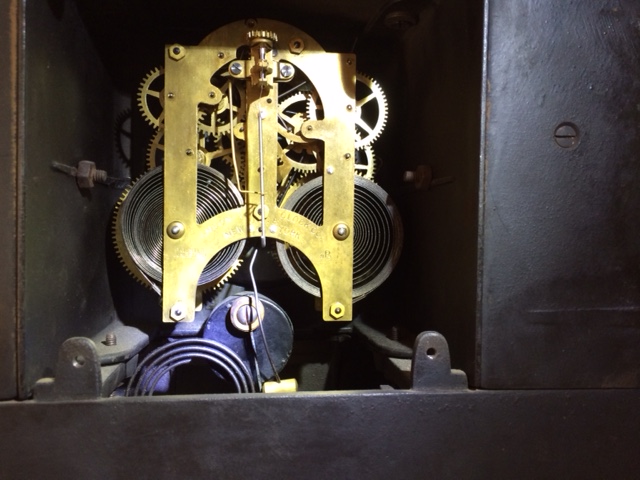 I have been flip-flopping on whether this could have been a model made purposefully without the sailors on top. This clock was made to commemorate the end of the Spanish-American War, so why distribute it without the commemorative piece?

Back to Julie, who has now recruited her husband Tim to the detective team!

The dial is paper, which I suspected. This means that dial and bezel do not match the original (commemorative) model. If you look at the restored and complete version, the bezel is very decorative and the dial, below the XII, has the Ansonia logo. The name of the company is also present above the VI. Now compare to the face of Julie’s clock, below. 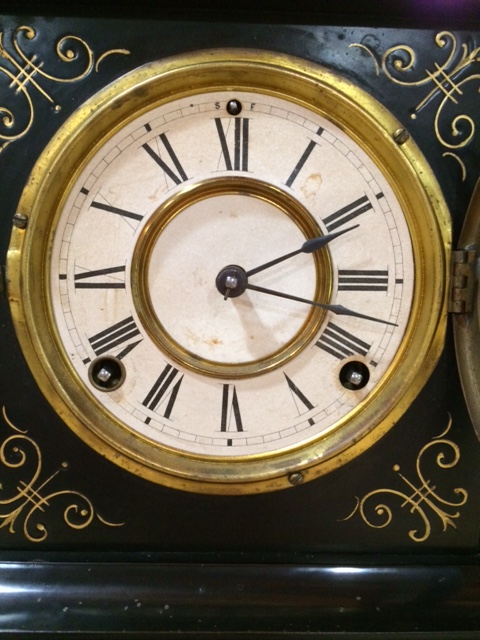 The face of the clock is still lovely, but it’s got some water damage. The font matches the typical Ansonia Roman Numeral font. Ansonia sometimes used Roman Numerals and sometimes Arabic Numerals, but their fonts were consistent. The clock hands also match the original. Final evidence that the dial is Ansonia are the S and F printed above the XII. That small keyhole hiding above the twelve is meant to make the clock either slower or faster, hence S and F. Check out a picture of a matching Ansonia dial below, though this one looks to be porcelain.

Julie and Tim reported that the top of the clock is definitely unaltered. I completely agreed with their assessment when I saw this bird’s eye view: 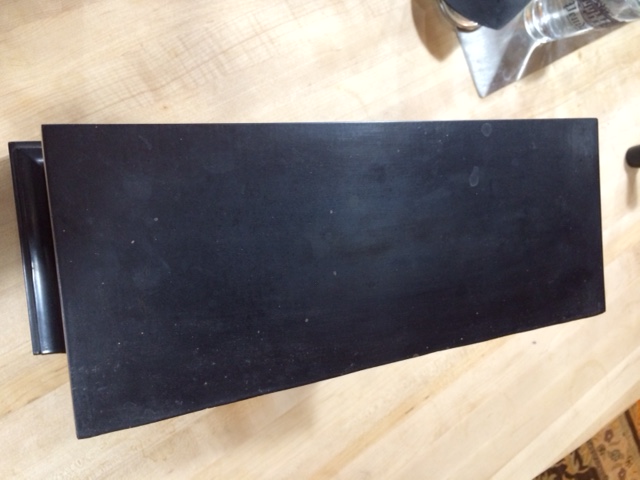 There are certainly no holes there. The clock is presumably made with what was called black iron, which was just steel (or some kind of iron alloy) painted black. Ansonia used it a lot, when they weren’t messing around with porcelain or wood. Julie wasn’t sure what material the clock was, but could tell it was painted black. Black iron clocks were traditionally very heavy, which matches up with Julie’s measured weight of 24 lbs. Yikes! If you put that on a shelf you better have a sturdy shelf. The brochure page for the clock is below.

The clock measured at 15″ long x 6″ deep x 10″ high, which matches with the dimensions of the “Mechanical Clock” I found online. The movement says that it is patented June 13, 1882, which also matches what was expected. There is every indication that this clock is completely original, and is a simplified version of the model which does not contain the wheel or sailors.

The movement is engraved with the words “Ansonia Clock Co, New York, USA” which is correct with the timeline of the Ansonia Clock Co, which moved from Connecticut to Brooklyn in 1883. So we know this clock is from post-1883. Two sources online give conflicting information – one says circa 1884 and the other says circa 1894. Since this clock was supposedly to commemorate the Spanish-American War which ended in 1898, I’m assuming that 1894 is more accurate. This is confirmed by the brochure above. To the far right, in the middle of the page, is the date 1894.

There are a few more interesting tidbits about this clock, including an engraving on the movement that says P 9 5. Clockmakers etched numbers into movements occasionally. There are quite a few Ansonia movements with the number 7 on them. I think this P95 (or 9P5) has some meaning internal to the Ansonia Clock Co and said something about the movement. Some of these engraved numbers were known to indicate a type of chime or other useful information for the company to know when assembling or fixing a clock.

Uncle Tim says that there is a small embossment on the underside of the top of the clock as well, which is interesting. Maybe it indicates where a hole would have gone, had one been drilled, or perhaps it was meant to identify what clock the piece of black iron was for.

Isn’t she gorgeous? That’s genuine marble on either side of the dial. The paper of the dial shows slight wear (from water or humidity, perhaps) but besides that, this clock looks to be in excellent condition. When moving the minute hand the hour hand also moved, and when passing the half hour the gong chimed. It is not wound regularly, and when wound recently it only ran for a few minutes before stopping. That is a fairly minor issue – the gears are working, which is the important thing. It probably just needs to be cleaned and oiled, though checking the pendulum wouldn’t hurt.

Additionally the springs didn’t look overwound, which would have caused serious problems if they had been stuck that way for some time. Replacing them may be necessary, although it’s likely someone has already done so once in the past since Julie mentioned that the back has some faint scribblings on it as if there were once writing there. That would be consistent with a jeweler’s service note, though personally I think the inside or bottom of the clock would have been more appropriate to write on. 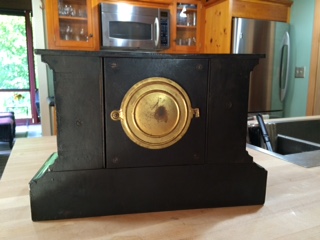 I don’t see the writing, though Julia said it was faint anyway.

Based on family history, I don’t believe that the clock has been serviced in at least 20 years. Maybe if we pressure Aunt Julie she’ll find an expert to take a look at it so it will run again 😉

Julie and Tim, thank you so much for letting me drag you along on this mystery! It was genuinely very fun to track down the clock model and find out about it’s unique history. Additionally, while researching I found out some fun things about my own Ansonia (?) clock. I’m very excited to follow that trail of bread crumbs and hopefully show you guys a completely pristine and working clock within the week. What, did someone say school? I must’ve misheard you.

P.S. I recently learned that you need a WordPress account to like my blog posts, though not to comment. This makes me sad, since I obviously like knowing that people are reading (and when you read it in your email WordPress doesn’t know about it). So if you’re feeling nice, drop me a line to say hi! You don’t need a WordPress account for comments (below) or to contact me privately.