I think we’re long overdue for a successful clock-fixing blog post so I’m here to deliver. Well at least, I started the delivery truck and I’m backing out of the driveway. I have “SUCCESS” plugged into my GPS. It says it’s rerouting.

If you recall, I was hoaxed into thinking this cute little sharp gothic clock was antique, or at least vintage. Clock shown below. 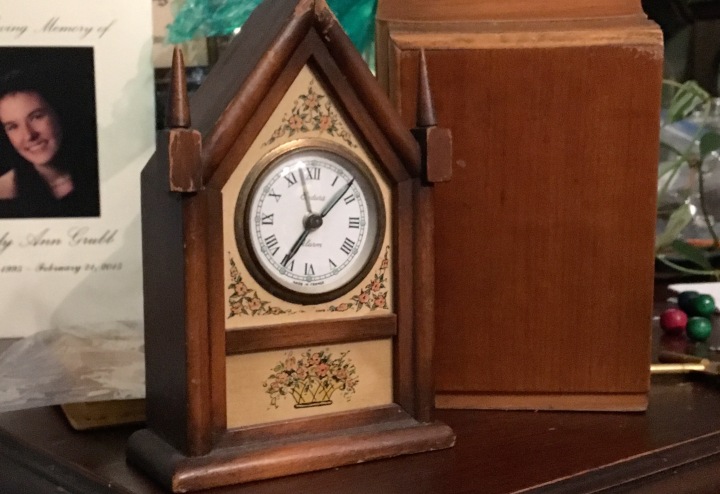 Long story short, it’s much newer than I realized but still is a great broken clock to practice on. The time wound, the alarm worked, so i just needed to figure out why it wasn’t ticking. For those noticing the third hand on this clock (pointing at 57 minutes in the picture above) that is the alarm hand. It winds separately and can be turned on and off to go off when the minute hand reaches that hand. It’s a pretty nifty feature and was very popular for a lot of the 20th century.

So I began by opening the clock up and putting on my really totally cool-looking not-at-all-weird headlamp and using my long thin set of tweezers to carefully poke, prod, and when possible, rotate, all the gears. 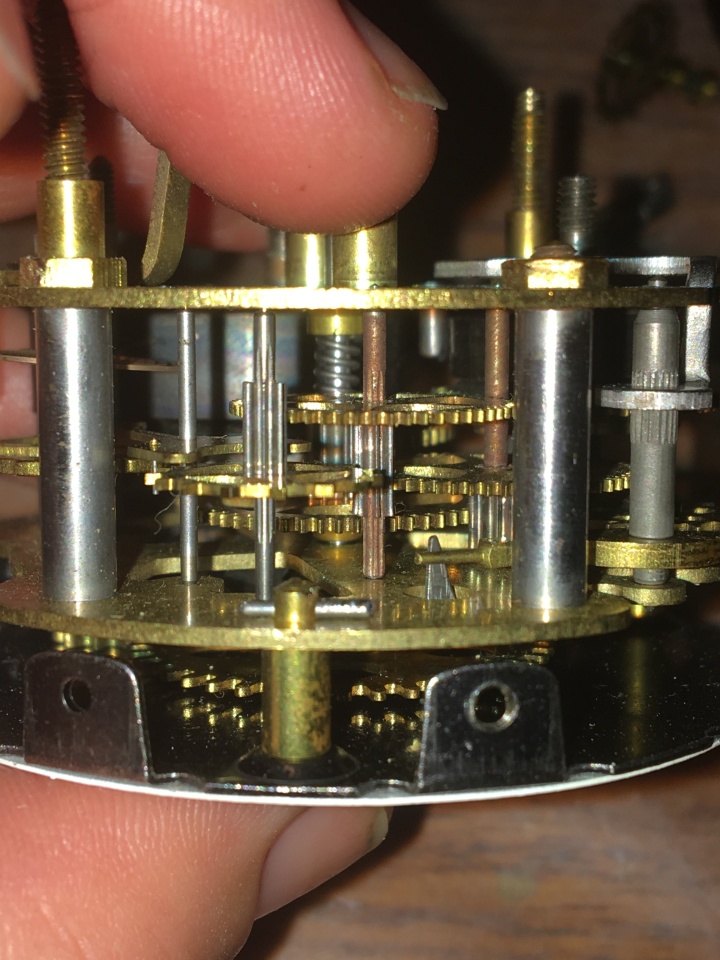 Note how there are two shafts that look rusty? I decided that the one in the foreground was most likely causing the immediate problem. When rotating the balance wheel to move the escapement that gear just wouldn’t rotate. It looked like it was having an identity crisis much like I have seen before – the gear is really made up of multiple parts and even though the two gears on the same axis are meant to rotate together, one is rotating and the rust is making the friction too great for the other gear to rotate with it. I have fixed this in the past by superglueing a secondary gear back onto the shaft it kept falling off of. It was supposed to be firmly pressed on. It’s concerning to me that this is a recurring problem, but it’s interesting that if one could perhaps mold, 3d print, or say, laser cut a POM (polyoxymethylene) gear instead, then one wouldn’t encounter the problem any longer… But that’s for another day when I know more than two months worth of clock trivia. (Seriously guys, I’m coming back to this. Message me about it for more info.)

So, I took the clock apart as gingerly as possible in an attempt to not break any more pins, since I’ve had a pin problem lately. I cleaned off the two gears that were rusty and then washed and dried them, and used a hook-shaped pick to try and clean every crevice of the two gears.

I immediately started to have problems with the balance wheel tension wire. Before it could get too out of control I took some proactive action (below).

I began to put the gears back in when, lo and behold, the same thing happened to the anchor of the balance wheel escapement as has happened to me twice before. The pins that stop the escapement wheel from spinning out of control snapped off! I still have not managed to fix either of those! (The Ansonia and the Narco).

But I decided not to let that stop me this time. You see, I’ve had a rough week and I work weekends so my rough week is ongoing. I was bound and determined to get a clock running tonight. So here’s the fix I came up with (below). I planned to cut the wire down to size once it was glued in place.

See how the pin on the left is a replacement that I am supergluing in place? Really, I’m not normally a superglue person. It’s just so easy to reach for it! I would so much rather have a permanent fix.

Now, lest you think that this is all easy peasy, let me assure you that is definitely is not. I am completely self-taught. I have one book. It is called Clock Repairing as a Hobby: An Illustrated How-To Guide for the Beginner and is by Harold C. Kelly. I am about 15 pages into this book because every time I try and read it I get distracted and go work on clocks instead. I do intend to read it because so far it has taught me a lot of very important terminology.

So I have been thinking about it and wondering, where do I go when I am completely stuck? My great-great-grandfather was a clock repairman (horologist). Yeah, really! My mother’s mother’s grandfather. He worked for the New Haven Clock Co after his own business went under, and hopefully one day I’ll post a history of him, but so far he’s a hard guy to research. Anyway, the only horologist (clock studier) I know is a deceased great-great-grandparent. Interesting, but not much help.

That’s what the National Association of Watch and Clock Collectors is for.

I began a temporary (three to four month) membership a few weeks ago in order to gain more access to some of their information. So I went on their forums, typed out my question complete with all the requisites stated in the Forum Guidelines, and hoping desperately. Only 31 minutes later my dreams were answered.

An NAWCC member to whom I am very grateful sent me the following advice. I would like to attribute the quote more accurately but I do not know this person’s name and I don’t know if they want their NAWCC handle shared. Perhaps I will send them this blog, though I don’t wish to spam them. The advice is below:

“The pins have to be steel, and MUST be EXACTLY the original diameter. Pivot wire works fine, and all supply houses have it. Piano wire is also fine. You could punch out the remaining piece of steel, then solder the new piece into the hole. Staking it in would be better, but solder will hold it fine if it’s tight to start with.”

There you have it folks. No one else has responded but my friendly NAWCC member seems to know what they’re talking about. I sent a few follow-up questions hoping that they hadn’t signed off yet, and was quickly rewarded. I wanted to know if they thought this was a common problem, and if they had a suggestion for punching out the remaining bit of steel. Here is the response:

“Just sharpen a small piece of steel (maybe the shank of a small drill bit) and tap it out. I don’t think it’s a common problem. You just have to handle those tiny hardened steel parts carefully. Tiny pivots too!

You could also sharpen one end of the new pallet too, and tap it firmly into the hole …. but the hole would have to be smaller than the diameter of the wire. You probably should tap it out from the short side (before it broke).”

Compared to my current attempt (see below), I really think this horologist is onto something.

This is a more physical hands-on problem than I have faced in the past. It’s not that I don’t have machine shop training – I do – I just haven’t had to do much with drill bits or piano wire in the past couple of years. This will be an interesting test of my self-confidence, I think. I know, deep down, that I have all these skills. The questions is whether I can walk into Home Depot or Lowe’s without looking like a lost sheep. And whether I’ll be brave enough to spend an afternoon on a project that I have some doubts about. I hear similar things from other girls in engineering. I know this is generalizing, but many girls lack some basic repair skills (how to use a drill, different saws, a dremel, etc.) and I think it is partially because we are just less likely to be taught it, whereas boys are more likely. Not that every male I know can use a drill, let alone a hammer.

Enough of that tangent. Let it be known that tomorrow, or as soon as I can fit it in, I head to the nearest supply store where I can make the necessary purchases, and then hopefully I will be fixing this clock shortly. I want to start on this one before I try to solve the exact same problem on the Ansonia, since the Ansonia is a much nicer clock (probably).

Thanks for reading, friends! I’ll let you know how my project with the pins on the anchor goes, and hopefully I’ll have lots of good pictures for you. Below, check out what I accidentally did with super duper duper glue while trying to glue a new pin onto the anchor of the balance wheel escapement this evening. Ultimately one of my metal files had to get involved…