What is Date Night? If you haven’t read the About Date Night page, here’s a quick description: Date Night is the one night of a week where I date (i.e. determine the age of) anyone else’s clock, as well as researching its history. I include the design, manufacturing, and external conditions of the clock as well as any interesting tidbits I can find. Sometimes we’re lucky and the owner has a bit of fun family history to add. It’s like an appraisal of your clock via the internet. Even better, it’s free and I’m looking for volunteers! See the About Date Night page for more details.

This week’s guest clock belongs to the family of my friend Julia B. The clock is pictured below. Julia was also kind enough to answer a few questions for me about the condition of the clock. The Q & A will be posted below, but for now let’s look at the clock. 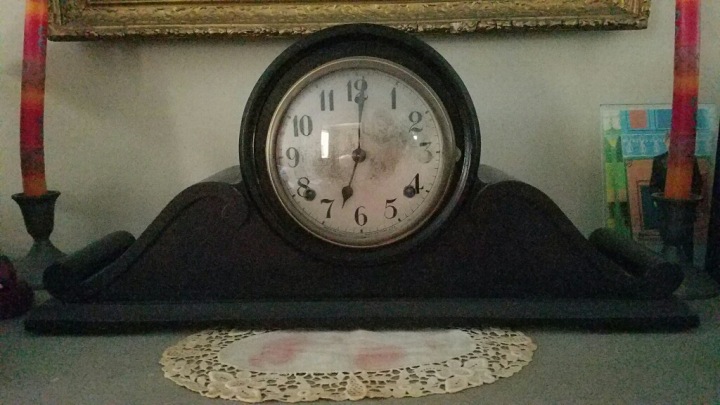 Let’s start with some initial observations just from this picture and then I’ll point out how I reached them.

Now how did I deduce those observations so quickly?

After doing an initial glance at the overall picture of the clock, I asked Julia to send me some more pictures of specific areas of the clock, and to answer some questions that to her probably seemed quite unusual. I’ll include our Q & A here so future clock submitters know the types of questions I’ll be asking. I’ll be using M to designate myself and J to represent Julia. I have shortened the conversation to only include what is necessary and have made appropriate grammatical corrections for reader clarity.

J: This one sits unworking in our living room. Gilbert Clock? There is a hole in the number 4 and the number 8. It’s probably not crazy old. It dinged when I shuffled it around for photos, so maybe it used to ring on the hour? I don’t know.

M: Can you take a few more pictures, like of the back and the bottom of the clock?

M: You said it doesn’t work, but it bonged when you moved it?

M: If you move the minute hand does the hour hand move?

J: The minute hand makes the hour hand move. In the video you can hear the ding. Oops I scared the cat!

Thank you Julia for volunteering your family clock for my first Date Night post 🙂 And thanks to Bob and Karen for owning such a lovely antique clock. The other photos that Julia sent me are shown below. Unfortunately WordPress doesn’t allow me to post videos with the current plan I am on, but the sound made by the clock was a low-pitched off-tune dong. 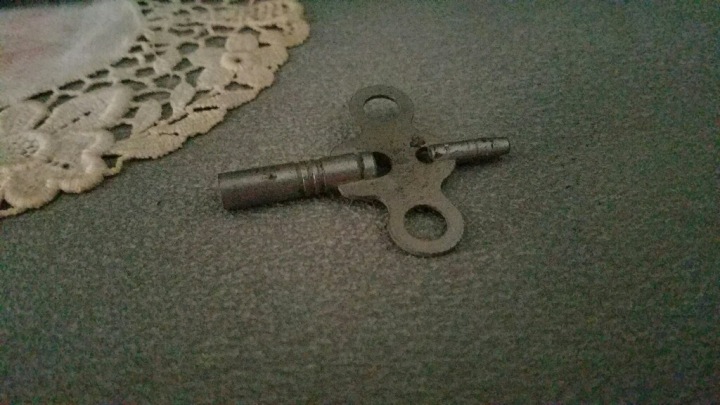 Imprint on the bottom of the clock case. 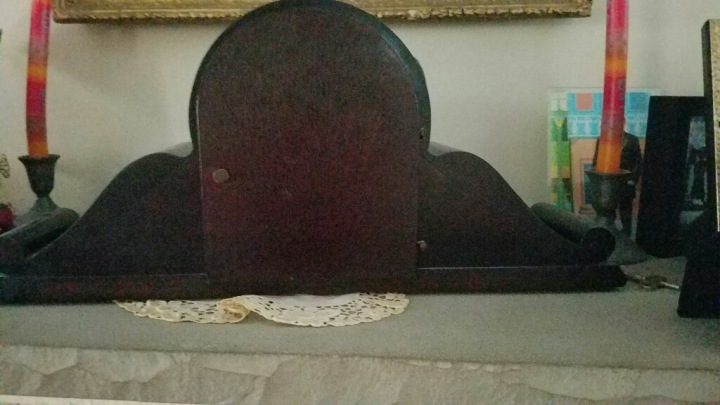 Above, the back of the clock.

Above, a close-up of the dial and bezel of the clock.

The writing at the bottom of the dial reads:

History of the Company:

Winsted is the name for the business district area of Winchester, Connecticut. The name may possibly be drawn from a combination of the name Winchester and the nearby town of Barkhamsted. Connecticut in the 19th and early 20th centuries was the center of all American clockmaking. The William L. Gilbert Clock Company was founded in 1871 by William L. Gilbert who had been working with clockmakers across Connecticut since 1828. I can only imagine what he learned in those 43 interim years. Gilbert himself died in 1890. His company lived in through various incarnations, through a recession in 1907 through the first World War. In the early 1930s the company was dissolved and was later reformed under a similar name.

Throughout its history the William L. Gilbert Clock Co was known for making affordable clocks and producing them in a quantity unlike those of their high-end competitors such as Ansonia and Seth Thomas. The company favored oak and black mantle clocks, though not exclusively. Over its lifetime the company operated under various similar but not identical names, such as the W. L. Gilbert & Company or Gilbert & Clarke Company. It only officially went by the name The William L. Gilbert Clock Company from 1871 to 1932. Julia’s clock featured in this review says “Wm. L Gilbert Clock Co” so it was definitely made sometime between 1871 and 1932.

The inside of the bezel (gold rim around the glass) of the clock has a small, easy-to-miss inscription. It is shown blown up below.

Having trouble reading it? It says PAT SEPT71920. In other words, something to do with this clock was patented on September 7th in 1920. We can therefore narrow down the time this clock was produced to 1920-1932. In fact, we can go a step further and find the patent, shown below. The patent is for the type of bezel, which is supposedly more easily removable than previous versions. The first page of the patent is show below. 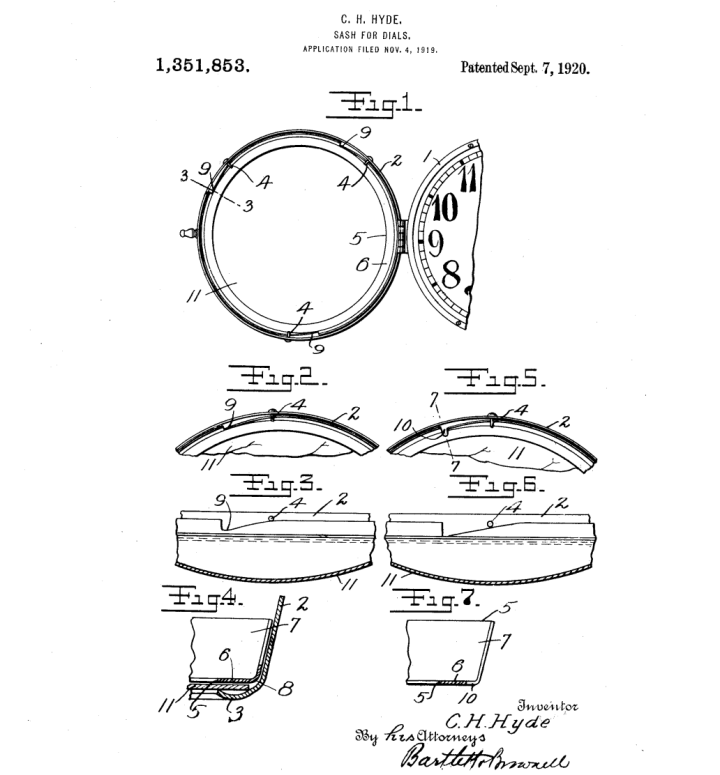 The next step would ideally be to identify the exact model of the clock. Unfortunately after a great deal of searching I was unable to find an exact model. Perhaps if I had access to Tran Duy Ly’s 1998 book Gilbert Clocks I may be able to identify the precise model from Duy Ly’s named photographs. However there were many clocks being made at the time and there is no guarantee that this particular clock made it into the book. However we can be very sure that this clock is not a “marriage” of clocks. That is what happens when the mechanism, dial, bezel, or case are separated and used in separate clocks. We can be sure of that because the patent on the bezel, the inscription on the bottom of the clock which I will address shortly, and the style of the wooden case are indicative of the William L. Gilbert Clock Co during the 1920s.

Some examples of similar clocks made by the same company during the same time period are shown below. Though none are an exact match, they contain many similarities to Julia’s clock in both overall style and in detailing.

It is safe to assume that the pendulum and mechanism inside the clock will look like the following images. 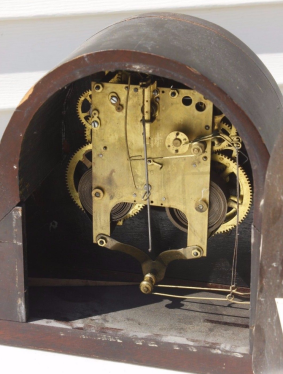 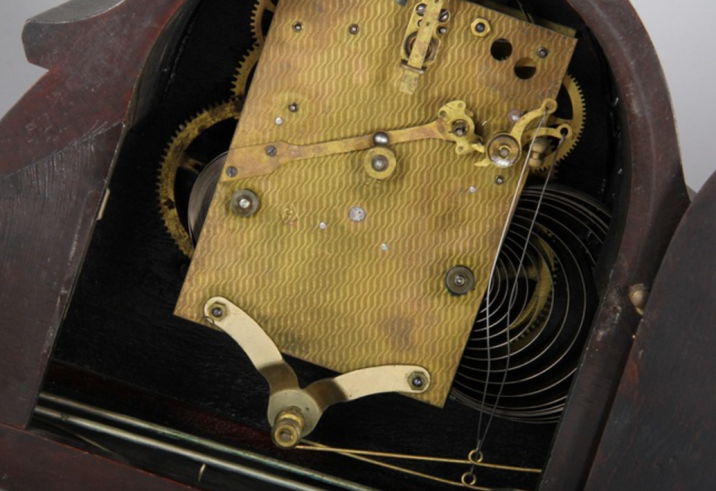 Note how the movement is predictably brass, normal for that time period. Also note that there are two brass bars nearly horizontal at the bottom right of the mechanism. These would drop onto suspended bars and echo inside the wooden clock case, making a resonating chime sound. The two bars means the chime has two notes. The inscription on the bottom of the clock says NORMANDY CHIMES meaning that Normandy Chimes is probably the name of the model of this clock. The aim is said to have been to sound like the church bells of Normandy, France.

To listen to the beautiful sounds of what this 1920s Gilbert chiming oak mantel clock would sound like in pristine condition, check out this Youtube video of the clock chimes in action.

Friends, I hope you got half as much enjoyment out of exploring that beautiful old clock as I did. Again, thank you so much to Julia, Bob, and Karen for taking pictures of their clock and allowing me to work my research voodoo to find out everything I can about it. Thinking of selling? Because the minute hand does move the hour hand, and because the mechanism is intact (you can see the spring shafts in the holes at 4 and 8 on the dial), and because the clock chimed when moved, I believe that this clock could easily be fixed. Barring extraordinary circumstances inside the clock, the work could take up to three hours and this clock could be up and running again. Lack of historical verification lowers the price, and in my online searches I saw working models without a historical background check selling for over $200.