It feels like eons ago that I was researching the differences between two seemingly identical miniature clock movements, Minxie and Narco, both from West Germany. 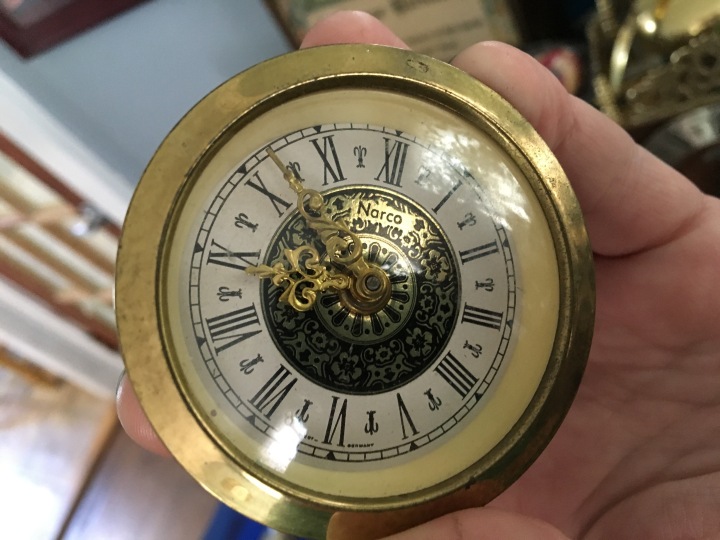 There’s still a bit of mystery surrounding those two (who copied whom?) but the movements were fairly different on the inside despite the dial and hands being superficially similar. The Minxie movement was all brass, while the Narco had some plastic gears that would be right at home inside a Quartz movement. That isn’t to say they’re more likely to break – I don’t know enough about the stresses on the gear teeth to say that. (Maybe one day I will!) Both clocks are fairly cheaply made, with plastic instead of glass covering paper dials, and gold-painted tin encircling the plastic cover.

So the Minxie, being the nicer of the two, I fixed and put inside the porcelain that the Narco had come in. The Narco currently needs a replacement part (the balance wheel) and isn’t running.

As you may notice, the porcelain isn’t in mint condition. The front left foot is missing, as are the tips of some curlycues in the back. I’m not in love with this case, but it seemed a waste to have a working clock without a case. Recently, however, I came up this little cutie pie on Ebay. 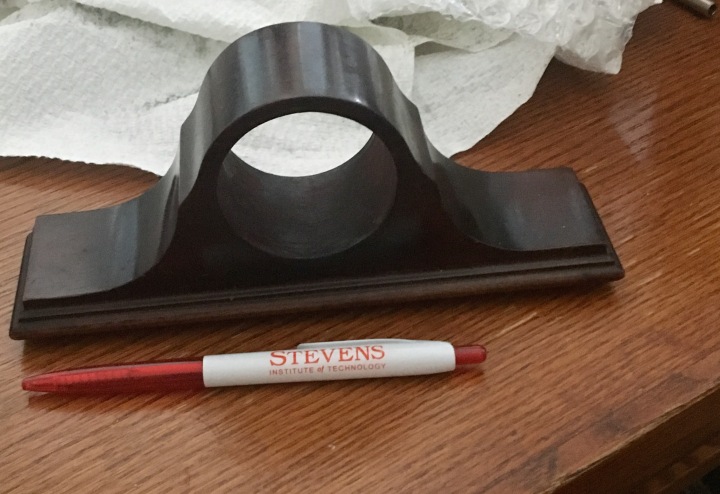 What is it that makes small things so adorable? I wish I could tell you, but this is a blog about clocks, not philosophy.

Tonight while watching October baseball (though sadly not the Yankees) I decided that the Minxie movement, sitting up on the top shelf of my clock collection and gathering dust, was deserving of a cute wooden case that would make it nice enough to put somewhere more visible. It’s not the clock’s fault that the porcelain case was a little broken-ish, after all.

Well, it’s been implied to me that sometimes I get a little overzealous. I really thought that it would fit! It’s supposed to fit! Whoever made that wooden case (and that’s a whole barrel of worms) didn’t allow for any tolerances.

Woe is me. I have no one to blame but myself. Thankfully it’s just thick plastic, so there was no danger. The clock movement is perfectly fine and it is still running well – just the plastic cover was broken. Perhaps I shouldn’t have been watching postseason baseball while trying to hammer home a delicate object. All the same, I removed the rest of the plastic and decided to let it rest until tomorrow. 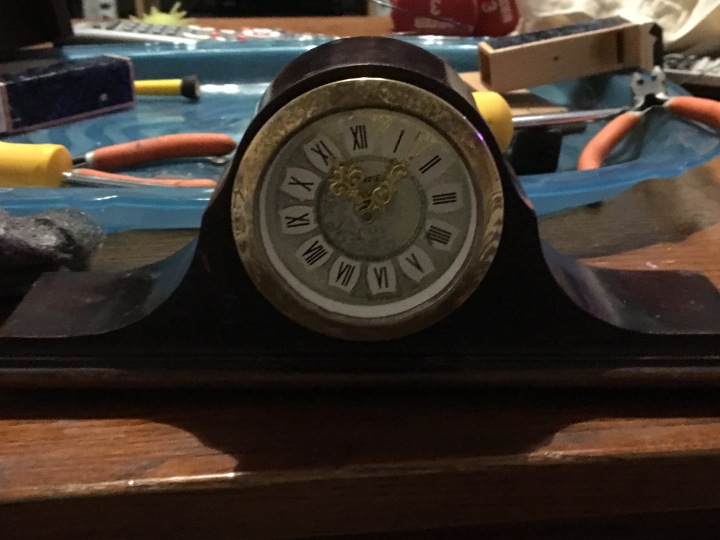 If I do say so, I think it does look very adorable. Perhaps I’ll take it out, sand down the inside much further, and take the plastic off the Narco movement and put it on this very similar Minxie movement. As I said above, the Minxie is a slightly nicer movement and the Narco currently is in need of a replacement piece, but externally they’re nearly identical.

I think it’s going to make a very adorable little clock when all is said and done. And the moral of the story? If it ain’t broke, don’t break it.

For those curious about the case, it has a partial label for the E. Ingraham Clock Co. I have my doubts. More research coming up on that.