It is that spooky time of the year again – when fear follows our steps, haunts us during our waking hours, and nightmares plague us. That’s right, I’m talking about midterm season. Cue the spooky music. Thankfully most of mine are behind me, allowing me to pick up where I left off on a few outstanding projects.

First of all, I have not forgotten my dear friend Amelia the cuckoo clock. 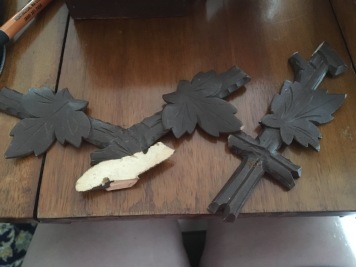 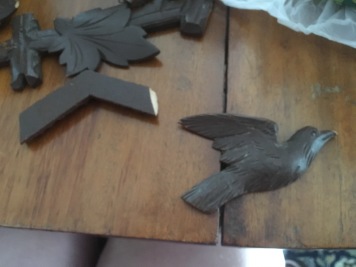 The case was not in great condition when I got it – most of the external decoration have broken into pieces, but all pieces seem to be present. I pulled out some wood glue tonight and got to glueing. I didn’t have enough clamps to clamp everything down so I hope painter’s tape will be sufficient. 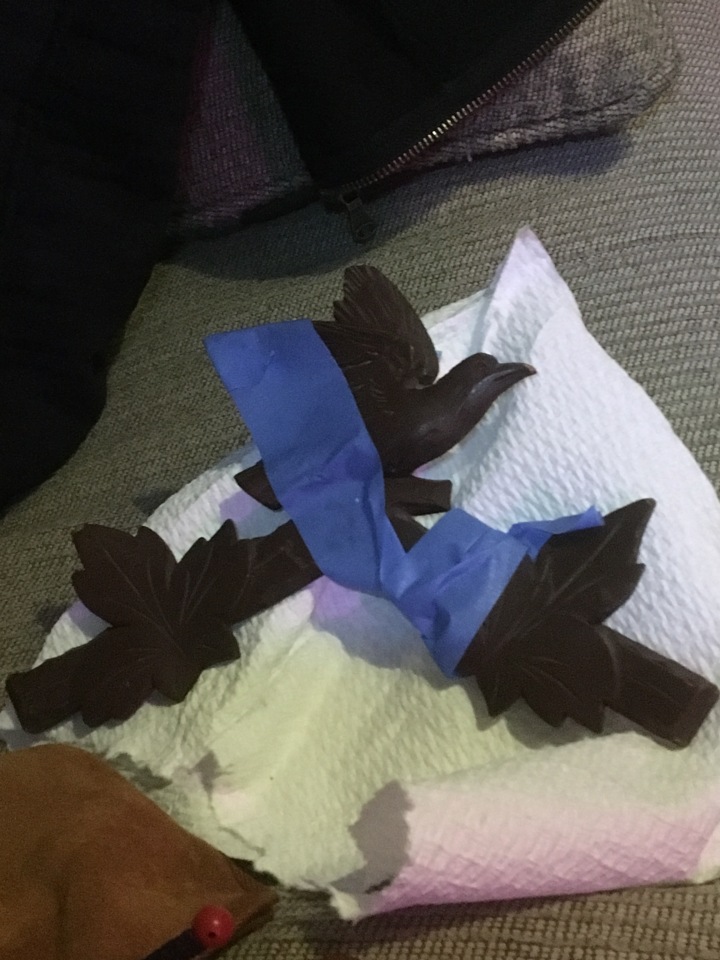 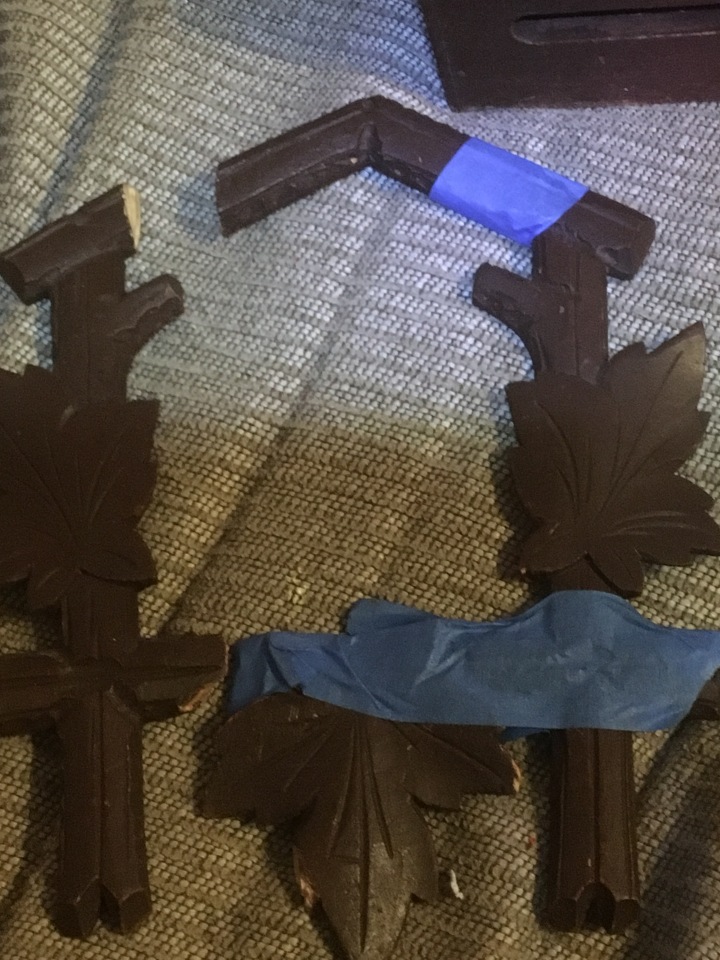 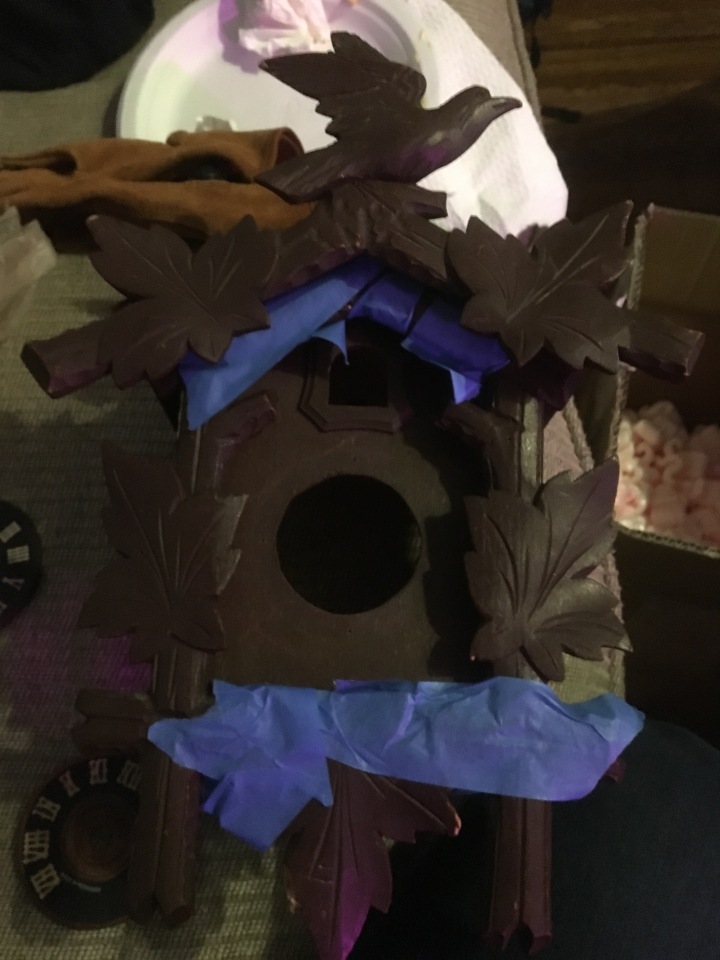 Even after just an hour drying the pieces felt very sturdy, and everything looks to be in fine condition despite the few wood breaks. One area that wouldn’t be easily fixable was the dial, but thankfully I had a spare correct size cuckoo clock dial lying around. I know, I thought that was strange too…

Anyway, the new dial I have isn’t as nice as the one I’m replacing (the roman numerals are painted on) but it will do the job well enough. 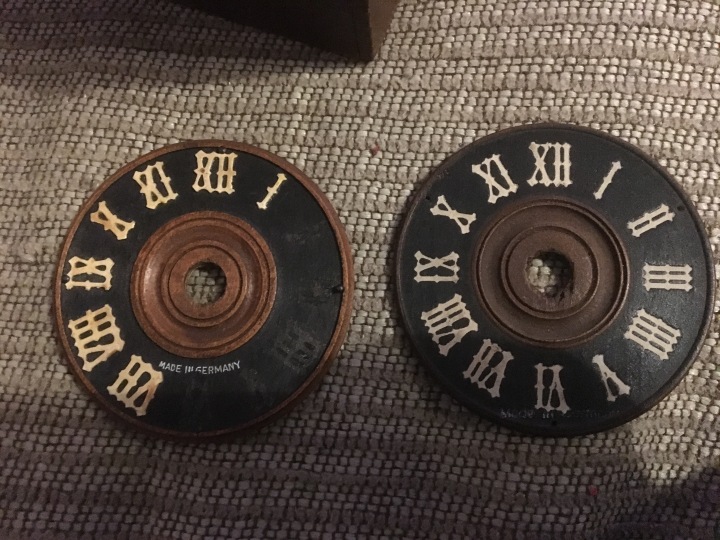 I’ll wait to attach the dial until I have the clock installed and running with replacement hands (they are broken off and missing) so that I can do a proper job centering it. I’m not sure yet whether I will go the route of the manufacturer and nail and pin most of the wooden frame and the dial in place, or whether I will use wood glue. I might test out the wood glue and see how well I like it first. 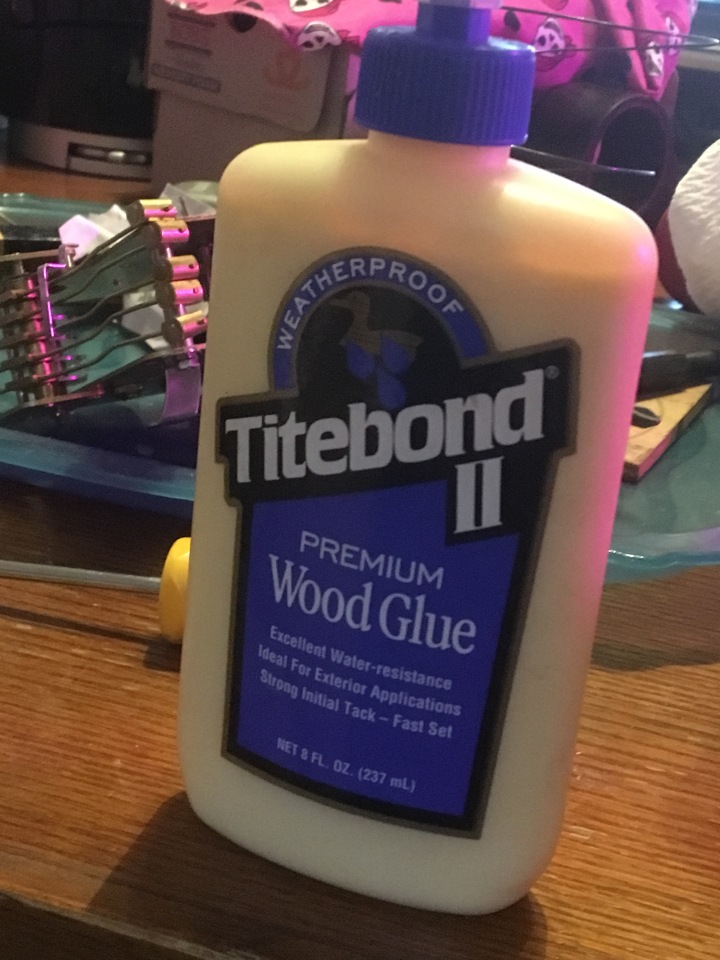 As it stands now, the case is looking good! I’m looking forward to taking the tape off tomorrow. 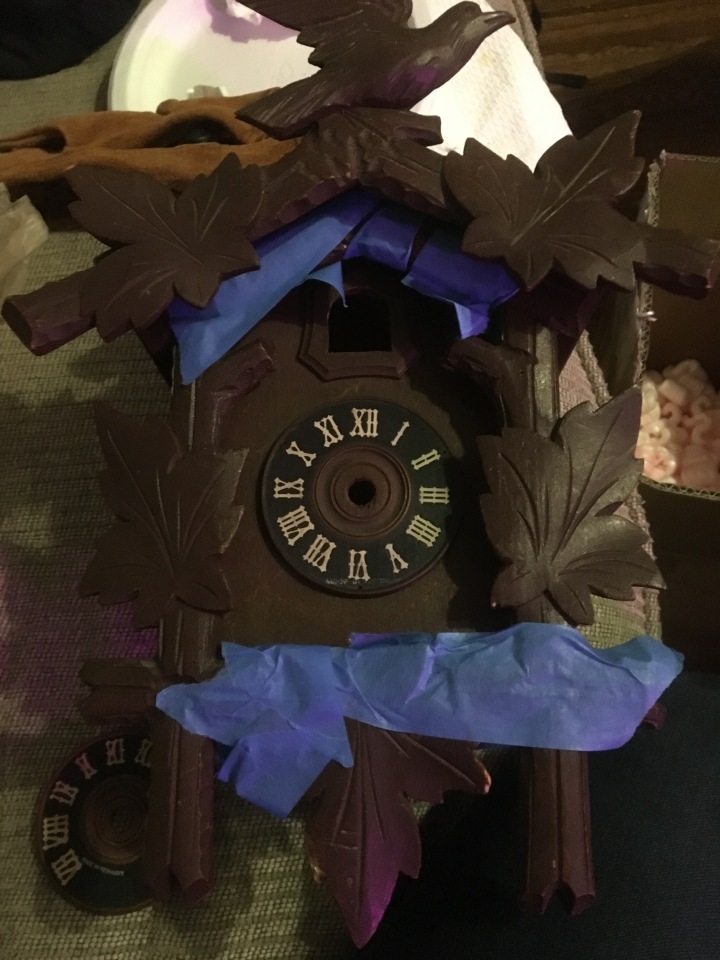 What about the movement? Actually the movement has been working well for a while now. I adjusted the pendulum and the escapement and it seems to work well as long as it is held up vertically. Unfortunately I don’t have a proper stand to support it and test how long it will run. I’m waiting until the wooden case is in working order, and then I’ll screw the movement back into the case and let it run (sans cuckoo) just to check that the clock will run long term. I haven’t forgotten that I need new hands for the clock too, and I’m thinking of cutting them out of a very thin sheet metal that I bought at my favorite dépôt, and then spray painting them white. I need replacement hands as well for my Lux Bluebird Pendulette, which will have to be smaller to accommodate the size of the clock. I have access to a Dremel that I’ve never used… sounds like this weekend will be fun 😀

What else has been going on in clockland? Well, you may recall that I had a minor accident while insert my West German Minxie clock into a miniature wooden mantel-clock-shaped novelty clock. 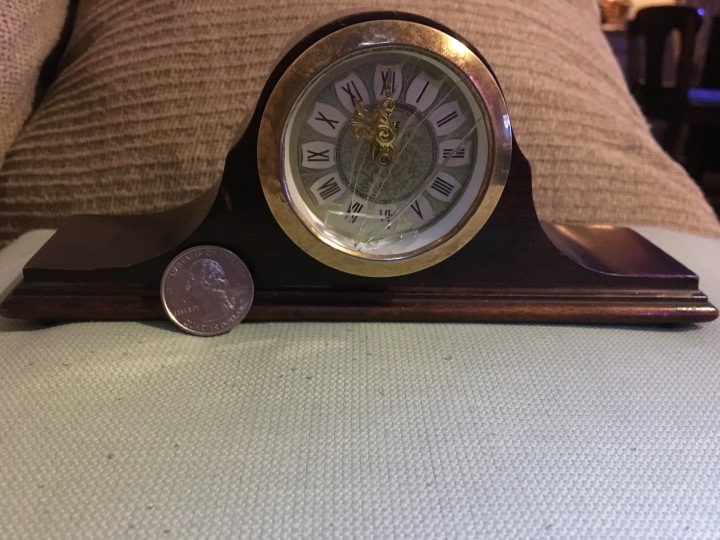 As adorable as it is, I needed to replace the protective plastic. I pilfered a plastic covering from a Narco movement and started to replace it, but that’s still ongoing. Thankfully I was able to carefully remove the partially inserted Minxie movement without too much trouble, and I took some time to sand down the inside of that case so when I put a new movement in it should fit.

That’s about all that’s happened on the actual clock fixing side – so what about the research side?

Well on September 30th I corralled my mother into going on a day trip to the National Watch and Clock Museum in Columbia, PA. It was a lot of fun and tons of inspiration for research I want to do in the future. While there I took advantage of the library and research center to research an ongoing clock project that I’m happy to finally unveil.

On this upcoming Monday (October 24th, 2016) I will joining some of the administration and staff at Columbia Senior High School in Maplewood, New Jersey to climb the 6 or 7 story clock tower installed in 1927 and inspect the current condition of the E. Howard Clock Company striker clock that was installed there when the tower was built. I have heard and read many things about this clock and this tower, but never seen them for myself. I’ve been working since August to find a time to come take a peek, and I’ve been doing plenty of research on the tower and on the E. Howard Clock Company. 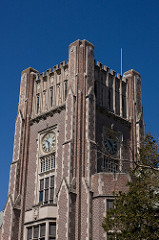 I have a lot of information I need to organize and hopefully I’ll know more once I see the clock itself, but expect a series of blog posts on this tower clock in the next few weeks. I’m beyond excited – tower clocks are a horse of a different color and this one is broken in a big way. I have no delusions that I’ll be able to assist with fixing it – in fact if anything I will only be able to confirm that it long past the point of being fixable. From what I can tell it has been serviced perhaps once in the past few decades and has not run in years. Keep an eye out for those posts, and for an update on how I do making the hands for Amelia Cuckoo and the Lux Bluebird Pendulette!